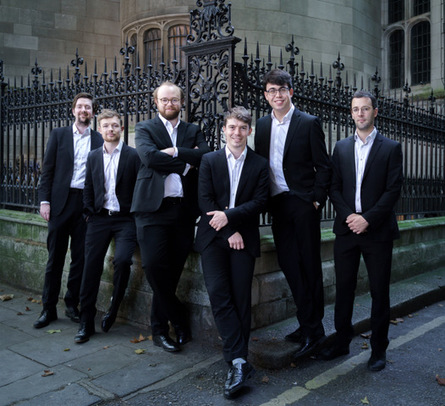 A very special sequence of concerts featuring one of the UK’s most accomplished vocal ensembles who have devised a series of programmes celebrating the 650th anniversary of the reform movement. The three performances take place variously in the former Catholic Priory Church of St Mary’s Easebourne, progressing to St Giles’s parish church in Graffham, one of the first scenes of Protestant activity in West Sussex (the rector allowed the hair to grow over his tonsure and replaced the communion wafer with bread as early as 1536) and finally to the United Reformed Church in Petworth. They will perform repertoire charting a musical path from 14th century composers Guillaume de Machaut and Philippe de Vitry, through renaissance English repertoire that draws in Robert Fayrfax, Sheryngham, and John Dunstaple, and bringing us right up to date with contemporary works by Judith Bingham and Richard Rodney Bennet.
The Gesualdo Six is the award-winning British vocal ensemble comprising some of the UK’s finest consort singers, directed by Owain Park. The ensemble formed in 2014 for a performance of Gesualdo’s Tenebrae Responsories in Cambridge and has gone on to perform at numerous major festivals across the UK, Europe, North America and Australia. Notable highlights include a concert as part of the Deutschlandradio Debut Series, their debut at Wigmore Hall in 2021, and collaborations with the Brodsky Quartet, London Mozart Players and Luxmuralis.
In association with the United Reformed Church, Petworth and with our thanks to the Rev’d Anne Lewitt
Please note that the repertoire performed at each of these concerts will be similar and that we don’t anticipate that the audience will join the Gesualdo Six as they progress from venue to venue during the day.