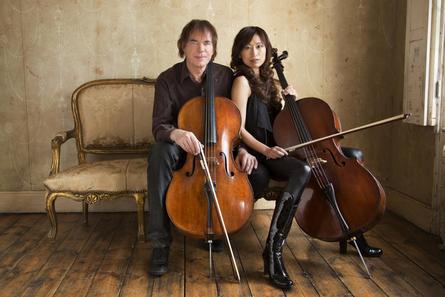 NEW DATES ADDED Due to hugely popular demand we have added two more performances on Monday 25th July.
The Petworth Festival is delighted to return to the stylish showrooms of Sofas & Stuff in Fittleworth for two hour-long intimate and, above all, comfortable concerts, featuring a notable musical and domestic partnership, Julian & Jiaxin Lloyd Webber.
One of music’s great communicators, Julian will open the door to performances by Jiaxin of two of the most frequently performed compositions ever written for cello, Bach’s collection of cello suites having most likely been written between 1717 – 1723 when he was Kapellmeister in Köthen.
In addition to his hugely distinguished career as a cellist, Julian is one of the most influential figures in the classical music firmament. In 2007 he founded the UK Government’s In Harmony programme and he continues to Chair Sistema England. The two programmes combined have introduced the power of music to more than sixty thousand school children from the least-privileged parts of the country. Julian has represented the music sector on BBC1’s Question Time and The Andrew Marr Show, BBC2’s Newsnight, BBC Radio 4’s Today and many others.
Jiaxin Lloyd Webber graduated from Shanghai Conservatory of Music in 1997. A former principal cello of the Auckland Chamber Orchestra; founder member of the Aroha String Quartet; and now married to her world-renowned cellist partner, JIaxin has performed with Julian for BBC Radio 3, Classic FM, CNN Global TV, and BBC TV. Their joint 2013 recording, A Tale of Two Cellos was the Number One UK classical album for many weeks and is one of the Naxos label’s bestselling recordings of all time