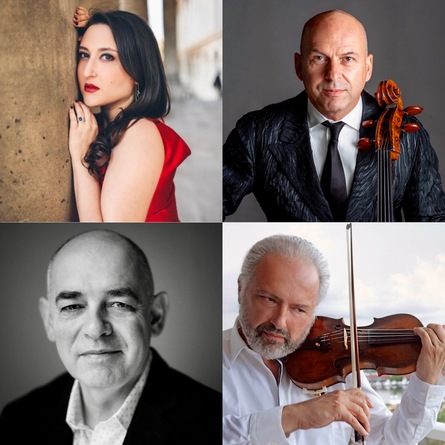 Julia Sitkovetsky – soprano
Dmitry Sitkovetsky – violin
Tim Hugh – cello
Iain Burnside – piano
The first of two stellar chamber concerts featuring the award-winning broadcaster and acclaimed pianist Iain Burnside in the company of three oustanding collaborators for a genuinely unusual programme which centres on Dimitri Shostakovich’s War Songs – a collection that is by no means as serious as the name might suggest! T
The War Songs were a unique project: Dimitri Shostakovich was assigned by the Leningrad Conservatory in July 1941 to make transcriptions for voice and two string instruments (violin & cello) for the Soviet War Effort: military trucks would carry three or four musicians in the back who would go to the front line or military hospital and perform popular tunes of the time with accompaniment of violin & cello.
Shostakovich made 27 arrangements of opera arias, popular songs, melodies from the movies of the 1930s. None of the music is his own, but all the arrangements are. The collection includes songs & arias by Mussorgsky, Dargomyzhsky, and Ippolitov-Ivanov, as well as Rossini and Bizet – all in Russian.