The Summer Weekend Out 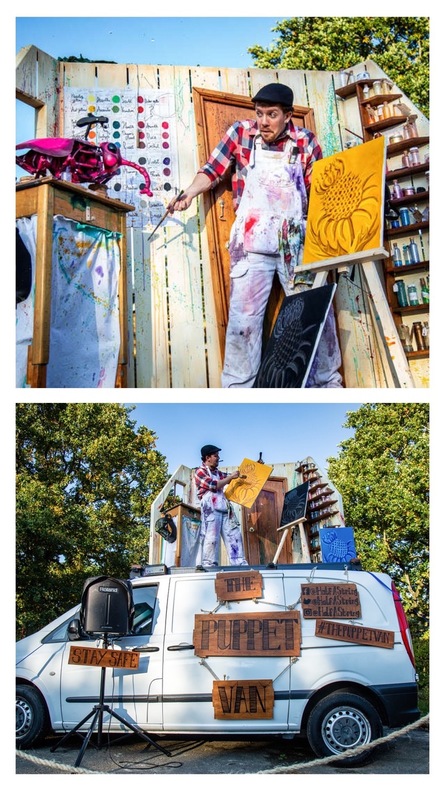 A joyous day of free live music, street performance, circus acts and hands-on participatory events in the Pleasure Gardens of Petworth House. Promoted in association and with the kind permission of the National Trust, the equivalent event in 2021 was one of the most extra special surprises of last summer’s festival, and once again we will be throwing the gates open to families for one of the loveliest and most relaxed events of the summer calendar. The acts participating include:

Half a String’s Puppet Van – Join Malcolm Brushell, a professional painter and amateur alchemist, on his quest to find the pinky-est pink paint on the planet! Through cracking rocks, mashing every conceivable vegetable, and even bottling and fermenting his own cow's wee, he has created every colour imaginable. Through stunning puppetry and an energy-fuelled performance all on top of a van, join this race to create the most potent pigmented pink paint imaginable

Poems Made from Words Found in a Bin – is part performance, part creative writing workshop, and part digital art intervention. You are invited to join Rhiannon Armstrong in creating poems made from shredded documents which are then animated and added to a growing collection, written by people in Portsmouth, Lincoln, Brighton, The Hebrides and London. Your poems will be uploaded onto the Slow GIF Movement channel on Giphy (with 39 million views), which will allow your poem to be read and shared globally on messaging apps and social media. And all from the middle of Petworth Park!

Strong Enough – an uplifting and moving celebration of the extraordinary strength of ordinary people. Charmaine Childs – the well-known ‘Strong Lady’ – uses the physical strength of her circus skills to reveal the inner strength of the stories she has collected from people around the UK – stories about times when they have been strong in their lives. The soundtrack is peppered with the voices of people telling their stories in their own words, mixed with verbal storytelling and with a highly physical physical storytelling style. Feats of strength, circus tricks, acro-dance and comedy weave together to deliver an uplifting, empowering and moving message: we are strong enough.

Simon Chainey – you want a genuine, bona fide all-singing all dancing, fire-eating street entertainer? You got him! His name is Simon, and his is one of the South’s leading family entertainers. As a proud Dad of three children he has always understood the importance of exercise and physical activity and first picked up circus skills in 2002 whilst travelling Australia. He soon fell in love with it and became a street performer and circus workshop instructor at events in 2006. Today, he is with us…

Sound Catchers – The Sound Catchers are here to try and understand humanity by harvesting its rhythms through sounds and movement. But where have they come from and what do they want? The Sound Catchers will interact with you to create dance and music that you can join in with. Live percussion, dance and cutting edge creative and digital technologies come together to create fascinating and fun show that is different every time.

Charlotte Campbell – Charlotte's upbeat and chirpy covers of pop classics are a hit with all ages. Often found busking along the river Thames and in London's busiest train stations, Charlotte's street performances have led to sold out shows in London and slots at Cornbury, Henley, Glastonbury – and now Petworth – Festivals.

Cirque Pyromantic – Beautiful, fun – and massive bubbles: bubbles that are definitely too big to pop! Adora Bubbles share their magic filling the space with a multitude of different sized bubbles creatjng a joyful aura of childlike wonder.

And to put you in a summery mood, face painter, Ashley Archer will be creating bees, plants and flowers wherever you look…
Free event
By kind permission of the National Trust
Part of Culture Spark
Photos: Simon Chainey